Bootcamp Grad Lands a Career in Software Development Despite the Pandemic

Before Daniel Villasmil attended our bootcamp, he had a year of college and completed his high school education.

Daniel heard about We Can Code IT  through a friend who had a positive experience going through bootcamp.

He did not have much coding experience besides a C++ class he took during his first and only year of college. Instead of attending college, Daniel realized he should enroll in a coding bootcamp.

His experience with our team was nothing short of marvelous. Daniel remembered his positive experience with Career Service Director, Lacey. She connected with Daniel and helped him choose We Can Code IT over competing coding bootcamps.

Daniel said, “We Can Code IT’s team is always friendly and open to hearing you out.”

Something that made Daniel’s We Can Code IT experience stand out is the substantial amount of teamwork exercises. He enjoyed the group work and constantly rotating teams to learn different points of view from other students.

Aside from the person-to-person interactions Daniel had, he also felt that the prioritized teachings at WCCI were incredibly helpful when it came to working in the tech world. Daniel still uses one lesson in particular which is known as Test Driven Development (TDD). He also explained how valuable the software development process is to have in the tech world. Daniel described TDD as a process that can save time and give precise results when working in the tech field. Without learning this process from WCCI instructors, Daniel doesn’t know if he would be as successful in his career as he is today.

Aside from the person-to-person interactions Daniel had, he also felt that the prioritized teachings at We Can Code IT were incredibly helpful when it came to working in the real world of tech.

Daniel uses one lesson, in particular, Test Driven Development (TDD). Daniel described TDD as a process that can save time and give precise results when working in the tech field. Without learning this process from We Can Code IT instructors, Daniel doesn’t know if he would be as successful in his career as he is today.

Daniel also liked being challenged to create his own application. It may seem unrealistic that a student without coding experience could create an application in just one 14-week  course. This challenge was no issue for Daniel and his fellow students. Despite being The first cohort during COVID-19 they overcame adversity and created their apps.

Because We Can Code IT pushes students to retain information and perform tasks outside of class, Daniel feels that he was given the best opportunity to succeed in the tech field. We Can Code IT’s teaching technique, allowed Daniel to actively recall information he learned during bootcamp, and apply it starting his job as a software developer. 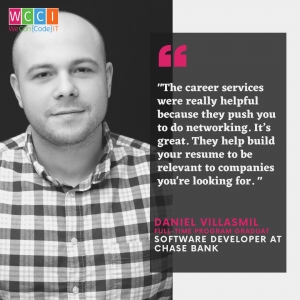 Being a part of the first cohort after COVID-19 began, Daniel felt it was difficult to begin the job search process. Many people were not hiring during the onset of the pandemic and the world had turned upside down. However, with the help of We Can Code IT’s career services, Daniel was able to extensively build his professional profile.

“The career services were really helpful because they push you to do networking. It’s great. They help build your resume to be relevant to companies you’re looking for, ” said Daniel.

Daniel now works at Chase Bank as a software developer. His job consists of a lot of automation and recognizing the behavior of applications.