After graduating from high school, Tyrique attempted to go to college. He was a first-generation college student-athlete. He did not like the educational aspect of college but felt pressure to attend. After struggling to learn from professors, Tyrique made the decision to take time away from college. He then became a truck driver. Although he had absolutely no experience in the tech field, Tyrique discovered We Can Code IT and thought he would give computer programming a chance.

Tyrique first found out about coding bootcamps after his friend was attending a different bootcamp. He knew he was dissatisfied with his current career and wanted a change, so he started looking into bootcamp admissions. Since he learned to distrust the classroom environment after a few poor experiences, he wanted to be certain that he was choosing the right bootcamp for himself. 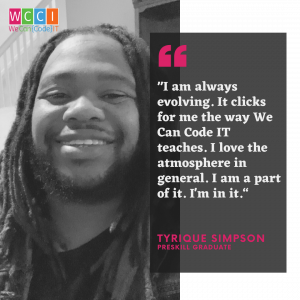 When joining We Can Code IT’s PreSkill program, the classroom suddenly had a positive connotation. “ The atmosphere made me feel like I belong as a person,” Tyrique explained. “The work I do now, I mope around day to day and try to get through. This is not how anyone wants to live so I am always evolving. It clicks for me the way We Can Code IT teaches. I love the atmosphere in general. I am a part of it. I’m in it.“

Oftentimes, people may experience imposter syndrome and self-doubt before taking a chance on pursuing a new career field. “What I have learned is we all have fear but it tries to lead us away from things we know we are good at. I noticed before I wanted to do something and out of fear and nervousness, I didn’t want to try even when I knew I was good at it” Tyrique said. Luckily for Tyrique, he was able to remove some of the barriers that prevent him from obtaining a stellar education.

One of the major de-stressors offered to Tyrique was PreSkill funding. He was working for Amazon and heard about an IMAP scholarship, which paid for his PreSkill education. Upon reflecting on how the scholarship influenced his bootcamp experience, Tyrique said “Everyone has financial stress when you’re going through school. Receiving the scholarship made me realize I can focus on the class and then worry about payment once I get a job. This was 100% the most important opportunity I’ve been given as far as schooling goes.”

Now that Tyrique isn’t concerned about repaying debt, he can focus all of his efforts on learning how to code. The first portion of the PreSkill program, Coding Fundamentals, is free and self-paced. The curriculum puts the literal “fun” in “Coding Fundamentals.” Tyrique described this first self-paced portion of PreSkill as “ Once I started doing it [Coding Fundamentals,] I realized it’s super fun but also informational. This was the first time in my life I’ve actually learned, I loved it.”

After PreSkill was such a huge success for Tyrique, he is well prepared for our ReSkill program. Even though he had absolutely no experience in tech prior to PreSkill, Tyrique says he is now 100% confident going into bootcamp and is ready to “kick the door down.”

Tyrique is prepared to hit the ground running once his full-time fall cohort begins. He’s been given the chance to take control of his life. “Coding gives me a sense of purpose. I feel like I control my own destiny when I’m coding. I’ve never felt this way in any other career path. I’ve always wanted to be my own person and it makes me feel in tune with that,” he exclaimed.