Age Is Just A Number: Bootcamp Grad Finds A New Spectacular Career at 49

Thirty years prior to attending We Can Code IT, Stephanie Stone thought about pursuing a career in technical writing. She was primarily teaching English at secondary schools and greatly enjoyed her time teaching. However, she wanted to  take the leap and transform her career

Stephanie’s coding experience started and ended with a high school BASIC course. She enjoyed learning the coding language and immediately caught interest in the topic. However, she did not see a future for herself in tech. Many men occupy the industry, and this can be particularly intimidating for women switching careers to join a male-dominated field.

When Stephanie eventually made the decision to attend a coding bootcamp, she saw We Can Code IT as the clear choice. 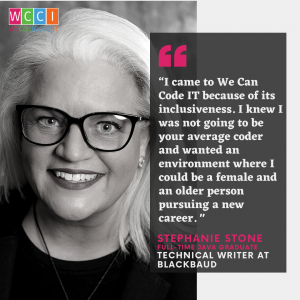 “I came to We Can Code IT because of its inclusiveness. I knew I was not going to be your average coder and wanted an environment where I could be a female and an older person pursuing a new career. I knew they would offer me a better environment where I felt more welcomed. Also, I personally prefer to work with a diverse group of people,” said Stephanie.

We Can Code IT sets itself apart not only from welcoming a diverse group of students but also by employing the best staff and instructors. Stephanie mentioned her experience with our admissions representative, Kendra.

“During the time while I was wanting and hoping for financing to come together, I still was able to talk to Kendra and she was always super responsive and impressive and kind. When I joined, the whole staff was welcoming and made you feel comfortable. The instructors used a lot of good icebreakers. My cohort bonded and connected really deeply. The vibe in the classroom was great, we were always chatting,” said Stephanie.

Stephanie’s cohort created an incredible bond that will last a lifetime. She mentioned how she stays in contact with 4 people from her cohort and works with one too.

“I got in with a great group of people and I felt super lucky to be in my cohort. We had fun and always supported each other. When it was over, we all stayed in touch and had a super valuable relationship,” said Stephanie.

She ended up getting a job as a technical writer at Blackbaud. One of Stephanie’s friends from the cohort worked at Blackbaud and recommended the job. Since Stephanie had a lot of work experience prior to bootcamp, she was not eager to enter the workforce right away. Instead, she did her research and found a tech job that she would enjoy the most. Stephanie became a technical writer, a career that interested her 30 years prior to her enrollment at We Can Code IT. An aspiration made into a reality.

There are many different job opportunities a career in tech can provide. Stephanie chose to combine her passion for English and tech by becoming a technical writer. While a career shift can be scary, especially during the later years in life, it worked out for Stephanie and she found herself working for a company that she loves.