College Dean Turned Programmer, Dr. Richard Montgomery Weighs in on The Merits of We Can Code IT’s Full-Stack Coding Program 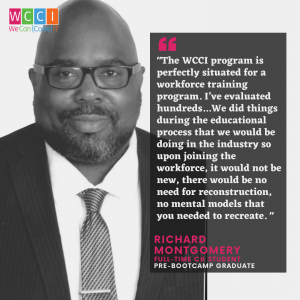 To say that Dr. Richard Montgomery has a passion for learning is like saying that Albert Einstein was a scientist. It’s true, but doesn’t quite do the situation justice. Dr. Montgomery has a deep appreciation for education and the people who supported him early on in his educational journey that led him to want to give back. He attained a bachelor’s degree in early childhood education and English. After graduation, he began his career as a classroom teacher and quickly realized that he had a talent for and a desire to step into a role working at the education policy level. That’s when he got his masters degree in educational psychology and special education. His first position at the college level was with a community college in Baltimore. It was a role leading an adult special education program. During his tenure at the community college in Baltimore, Dr. Montgomery became acquainted with the world of college administration and set his sights on becoming a college president. He wasted no time in completing his Ph.D.in school district leadership. He was on his way!

Dr. Montgomery then took a position as a dean at Tri-C Community College in Cleveland. That’s when the reality of his career trajectory really set in. He would need to go anywhere in the country that a job was open in order to climb the ranks of college administration from dean to vice president and then on to president and finally provost. The level of commitment needed to move wherever the job demanded was troubling. Dr. Montgomery and his wife are caregivers to their young son with a disability that requires around-the-clock care. Dr. Montgomery also cares for his elderly parents, and his mother is in the midst of late-stage dementia. These familial responsibilities demanded a re-evaluation of his career path. Dr. Montgomery left the education world and began pursuing a career as an entrepreneur in computer networking. Business was picking up when Covid-19 foiled his plans.

After his business was forced to close, Dr. Montgomery promptly began researching different careers. He found that the IT sector needed more people, so he started looking into coding bootcamps.

“I saw We Can Code IT was ranked one of the best bootcamps. Having these sorts of ratings means people are obviously having success getting through the bootcamp and having good experiences to where they would rank the bootcamp higher than other camps,” he explained.

Dr. Montgomery chose to attend We Can Code IT (WCCI) pre-bootcamp as he had very limited coding experience. He adds, “If you have no coding background or experience, I think pre-bootcamp is an essential resource that everyone should use. It will give you an initial understanding of the field, expectations, classes and hopefully reduce some of the anxieties about whether or not this is something you can accomplish.” Dr. Montgomery credits the National Center for Urban Solutions (NCUS) Scholarship for pre-bootcamp as greatly impacting his ability to make a career change.

Once he was immersed in Pre-Bootcamp, Dr. Montgomery immediately took a liking to his instructors, “As a person whose background and research is in how people learn things, I’m always very critical of how people deliver a course. One of the things that I can speak most comfortably about is that having multiple instructors (at WCCI) relieves the burden of people who have a lot of questions, needs and problems to work through as they arise. The instructors and their demeanor are very kind and patient and supply all the things that you need when learning new (coding) languages.”

WCCI takes their commitment to equity in technology seriously, and the fact was not missed by Dr. Montgomery. He expands, “As an African American man who has seldom had an instructor who looks like me, it was nice to have a knowledgeable African American instructor. There is research about people who get into a particular job with people who look like them so it was reassuring.”

When asked about his experience when continuing on to WCCI full-stack coding program, Dr. Montgomery beams, “We started with practical applications and building a repository of work that we were going to be able to show people later on. In the 14 weeks we build many different projects, individually and with teams.”

Dr. Montgomery is no stranger to evaluating curriculum. He explains that, “The WCCI program is perfectly situated for a workforce training program. I’ve evaluated hundreds of workforce training programs throughout my career, and what I found here is that there are some really unique components to WCCI’s Full-stack Program.  We did things during the educational process that we would be doing in the industry so upon joining the workforce, it would not be new, there would be no need for reconstruction, no mental models that you needed to recreate. You are doing the kind of work (in the WCCI program) that you would be doing for ‘Acme Coding Company’ upon landing your first job. “

Dr. Montgomery volunteers the following with regards to WCCI’s career advancement department, “As much as I knew how to write a resume and cover letter, (WCCI Career Services) is very thorough in that, if you come through this program, you’re going to leave with a resume that will represent what employers are looking for in the technical field.” He expressed that many of the students in his cohort were already talking with employers about jobs prior to graduation. This is due to the diligent efforts made by WCCI career advancement to place WCCI students in lucrative jobs.

When asked if he’d like to add anything in closing our interview, Dr. Montgomery explained that he now realizes that he’s definitely chosen the right career, “There were days in my previous job where I just wanted to go home, kick my feet up and not talk about work today. Now I can’t wait until I can get home and talk with my wife about this awesome program that I was working on, and I made it work!” He likens his newfound career inspiration to being an artist,” An artist gets to create something that millions of different people can look at or use, or in the case of technology, may not have even existed before. Or maybe it has existed before, but when you put your hands on that keyboard, you can turn it into something else. That’s an awesome feeling!”

Click here to read the Spectrum News article about Richard’s family and the impact of his newly-found career.