From Opera Singer, to EMT, to Web Developer

Pedro had been searching for the right career for sometime. In the beginning, he was working as a Professional Opera Singer while picking up additional parallel jobs to support his career. He was able to build a sales and management background by working as a manager of a cellphone store, then selling insurance and cars. At the time of the pandemic, Pedro thought he wanted to pursue the medical field. He worked as an EMT for a year and a half with plans to become a nurse when he suddenly became sick with COVID. During his isolation period, Pedro knew he needed an outlet to keep himself entertained. What better way to stay busy during a 2 week isolation period than playing around with coding languages?

His COVID isolation period did not have to be mundane once Pedro decided to pick-up coding after a long hiatus. When Pedro was young, he was taught web design techniques such as basic HTML and CSS. He later taught himself bits and pieces of a few coding languages. Once his isolation period was over, and Pedro spent countless hours messing around with code, he decided he wanted to pursue a career in tech. During his interview, Pedro recalled a moment where he told his wife that he no longer wanted to pursue a medical trajectory, and he wanted to attend a coding bootcamp to take a deeper dive into how to code. 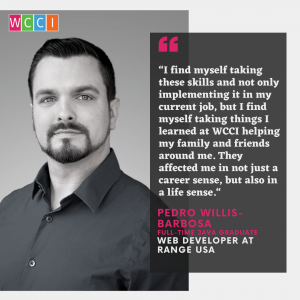 Upon deciding which bootcamp to attend, We Can Code IT (WCCI) immediately stood out to Pedro. While he did extensive research on various options, he decided upon WCCI for a few different reasons.

“They had a good track record. Course Report and other review websites said We Can Code IT is a good bootcamp,” he said.

Acquiring funding for a coding bootcamp can be a stressful situation. Pedro mentioned this component and went into detail about how WCCI offered the most affordable funding options compared to other bootcamps.

Pedro flew through bootcamp. While he had professional experience in the past, he was able to hone in on these skills with his Career Services Coach.

“He [Pedro’s Career Services Coach] really helped pare down ideas of how to quickly represent myself in a succinct fashion, then how to take the things I learned at previous jobs and how to upvalue myself based on those experiences. Before, my evaluation of myself to employers was vague, but he made it specific and shiny,” Pedro elaborated.

By the end of bootcamp, Pedro was already interviewing for developer positions. He secured a job after his second interview as his 14 week bootcamp experience ended.

Today, Pedro works as a Web Developer at Range USA. He uses the skills he learned at We Can Code IT to launch projects in days when they should take weeks. When discussing his We Can Code IT experience and secret to such fast problem solving, Pedro said