Krystyna had a job in creative design before bootcamp, but wanted to expand their tech knowledge in new ways. They attended a different coding bootcamp before We Can Code IT, but the program was not the right fit. However, the second time was a charm for Krystyna. 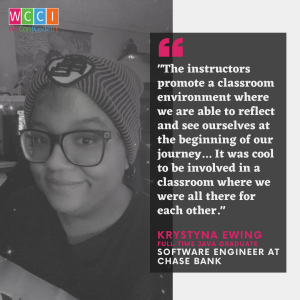 Krystyna always wanted to attend We Can Code IT. When we opened a location in Columbus, where Krystyna lives, they were ecstatic to have the opportunity to attend the bootcamp. “I love their mission and how inclusive and diverse they are. As a black queer person, We Can Code IT allows people like me to get into tech,” they said.

While Krystyna attended multiple coding bootcamps in their lifetime, they were able to give more insight on what good and bad qualities a coding bootcamp might have. One component Krystyna mentioned in particular was the classroom atmosphere. The We Can Code IT environment for Krystyna became a unique setting that was unlike any other bootcamp they attended. “The instructors promote a classroom environment where we are able to reflect and see ourselves at the beginning of our journey. We all start to understand and realize how far we have come. It was cool to be involved in a classroom where we were all there for each other. See the struggle, but then encourage each other. The instructors promote this uplifting energy,” they said.

The instructors’ attitudes added another enjoyable element to the bootcamp. “The instructors felt like what they were teaching was important. That impacted me and made me appreciate how important it was,” Krystyna said. Understanding the importance of coding was a big element in staying motivated during the 14-week program. “My instructor was so dedicated, he had a newborn baby and still stayed up with us until midnight to ensure our project was ready on time. They always made sure we were not missing anything and that we understood the content before we moved on to different things,” they continued.

In addition to the instructors going the extra mile for their students, the career advancement team holds themselves to the same standard. Krystyna shared that their career advancement coach was always looking out for their best interest. “He [the student success coach] is honest with you and that is something you need the most in tech,” they said. After many career advancement meetings for interview preparation and  resume building, Krystyna was prepared to hit the job market.

Today, Krystyna is a software developer for Chase. They are able to use their past tech experience in conjunction with the lessons provided during bootcamp. “I’ve been to a few bootcamps. I’ve gone to good bootcamps and some crummy ones, and I am positive that We Can Code IT is one of the best,” Krystyna concluded.