Couples That Code Together Stay Together: Engaged We Can Code IT Bootcamp Alumni Become Software Developers

Kendyl Hull and Sam Yoder have been together for 7 years. They met through Sam’s mom, who was Kendyl’s boss in college at the Ohio State University Agricultural Technical Institute in Wooster, Ohio. Kendyl was in the middle of her college career when she met Sam. He was already living in Wooster, Ohio at the time.

Kendyl and Sam were always exceptionally supportive of each other. In 2020, when Kendyl mentioned she would like to pursue a more impactful career, Sam was ready to do whatever it took to help Kendyl during her transition. “She is really brave,” said Sam. “She just jumped right in [to the bootcamp]. I had experience in the tech field and even I was nervous to take the jump.” 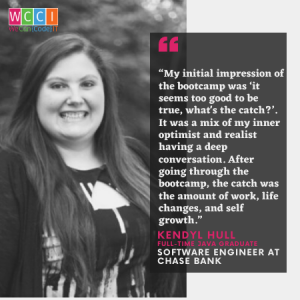 On the other hand, Sam had some previous experience with computer science from college. Early in his career, he determined that it might not be for him and found himself working in elder care. He really enjoyed his career and became the director of activities. However, during covid, Sam lost his passion for this career and knew it was time to make a change.

Kendyl and Sam were initially referred to We Can Code IT by their friend, Ryan, who previously attended the immersive program, then the rest was history. Once Sam started to look into We Can Code IT, he engaged in speaking to different graduates. Every graduate he had spoken with was already employed in the field after bootcamp. “I wanted to go to a bootcamp that would help me get a job. The goal was to be employed as soon as possible,” said Sam.

Once bootcamp started for Kendyl, she knew her bootcamp experience would turn out to be life-changing. “I think my initial impression of the bootcamp was ‘it seems too good to be true, what’s the catch?’. It was a mix of my inner optimist and realist having a deep conversation. After going through the bootcamp, the catch was the amount of work, life changes, and self growth,” said Kendyl.

When asked about their experience with our staff and instructors, Kendyl and Sam had similar responses. Kendyl expressed that she felt as if We Can Code IT is a community. Each individual was very willing to teach or coach her through anything she needed. For Sam, We Can Code IT instructors were far from anything he was used to in college. In previous computer science courses, Sam was met with instructors who were not personable. He compared his two experiences as “ In college, I had the stereotypical instructor that wanted to be left alone. They often would give you a tiny bit of help. The bare minimum and then leave you alone. At We Can Code IT, they always wanted to help me. I never had trouble getting into contact with anyone when I needed help.”

When it comes to the job search, neither Sam nor Kendyl struggled to find a career with a

corporation they admire. Both Sam and Kendyl are employed with JP Morgan Chase. Sam was offered a job after participating in a “Hackathon,” while Kendyl used a combination of assistance from the student advancement team and her determination to receive a job offer in no time.

A major reason why Sam and Kendyl had such speedy success with finding technology jobs was because they strongly utilized the career success coaches. “I think the biggest thing they offered was having so much facetime with different recruiters,” said Sam. “We were talking to 1 or 2 recruiters every other day. I had so many LinkedIn connections. I actually had way more than before taking the bootcamp. I had my resume, cover letters, and everything I needed to get a job. I also didn’t have to work on any of these after I finished my cohort. Having those links and not having to cold call and blindly reach out was amazing.”

For Kendyl, she had a little bit of a different experience with our career advancement team.

She went above and beyond with utilizing the resources provided to her. “There are a required number of meetings you have to do with career success. You have to do 4 but Kendyl did 12 to15 meetings. She used the student success team as a resource all the time. Kendyl was always picking their brains. Then, Kendyl would use this information to know who she needs to reach out to,” said Sam as he described Kendyl’s experience.

Today, Kendyl is working as a software engineer at Chase while Sam is starting in mid-October. Sam is ecstatic to begin his career at Chase after hearing such positive feedback from other developers.

“Both Kendyl and I had such wonderful experiences at We Can Code IT. We recommend it to anyone who can work hard, pick things up quickly, and is wanting a career change,” Sam exclaimed.

Kendyl and Sam got engaged the weekend before Kendyl graduated from the bootcamp during the pandemic and are planning their wedding for the Fall of 2022.