Jovahnn Tucker always knew he belonged in the tech field, it just took him a moment to find his way into the world of coding. Starting out as an IT technician at Amazon, Jovahnn had a great amount of experience in the field of IT. However, this is not to be mistaken with programming knowledge. He watched a few HTML videos, but did not get anywhere. This is when Jovahnn knew he needed to attend a coding bootcamp to get a little more support and guidance. 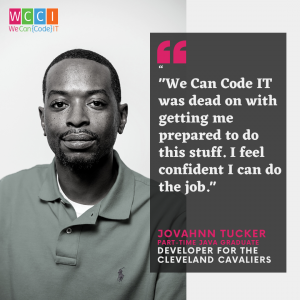 He then started doing avid research on coding bootcamps, and was particularly drawn to We Can Code IT. He found comfort in being able to attend a local cohort. Upon researching, he discovered that We Can Code IT was founded by Mel McGee, a woman who wanted to tackle the challenge of championing social equity through technology and diversify the tech field.

“The lady who started We Can Code IT started it as a way to empower women and underrepresented groups that want to get involved in tech. I’ve always wanted to give back to IT and give these groups an opportunity to get into the field. We Can Code IT’s values align with my values,” said Jovahnn.

One major takeaway Jovahnn took from his bootcamp experience was that many people cared for him throughout his journey.

Jovahnn expressed, “Once I started the bootcamp I absolutely loved my instructors. I was grateful for them taking the time out of their busy lives to show me their art. They come across like they take the program super seriously and care about our class. I like that they love what they do and love teaching us about it. They are always willing to help you out and explain things. They are a godsend.”

The instructors were not the only impactful interaction Jovahnn had during bootcamp. When it comes to his classmates, Jovahnn had a lot of positive feedback. He mentioned his classmates kept him motivated and inspired.

“They [the classmates] kept me motivated. I was able to catch on easily, some classmates had no experience and to see where they started to where they are now is amazing. I am really grateful for some of the relationships I formed with some of my classmates. Seeing their growth from week 1, to 5, to 18 was inspiring to me,” said Jovahnn.

“My experience has been amazing, the team has been supportive, everyone knows I am a rookie and they don’t overwhelm me. They let me learn. They show me things but don’t make me go crazy. I can help and dig in and be ready at a good pace. I see that they put it as a practice at the enterprise level and I noticed it’s just how things were done at We Can Code IT. I understand why they are doing what they are doing. We Can Code IT was dead on with getting me prepared to do this stuff. I feel confident I can do the job. I know it is a process and I have to work hard and learn as much as I can.”

Luckily for Jovahnn, he attended a coding bootcamp that prepared him for his entry-level developer job with the Cleveland Cavaliers. He even landed the job before he graduated from bootcamp! If Jovahnn was able to give a bit of advice for those considering attending our bootcamp, he would say to be patient.

“Be patient. I learned that there is a method to the madness with how they teach us stuff. As you go through bootcamp, it doesn’t always have to make sense. At a certain point, it will click and you will start to realize the routes you took early on end up making sense by the end of the course. You will see this is why you learned the way you did. Be patient because it may not always make sense. It might even seem repetitive, but once you get to the end of bootcamp, it starts to all connect together like a puzzle.”