Prior to bootcamp, Jeffery Sailsbury performed a job that required a lot of manual labor. He operated forklifts for a third-party warehouse. Once the manual labor became too exhausting, Jeff decided to move towards a new career.

Jeff realized We Can Code IT was the right move for him when he started watching his friends code. His friend was an instructor for We Can Code IT, and Jeff trusted his friend. 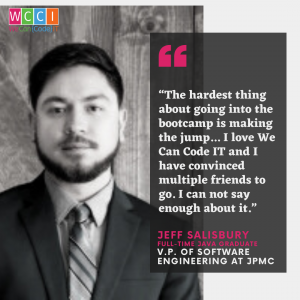 Besides the minimal time he spent with developer friends who showed him a few basics, Jeff did not have any coding experience going into bootcamp.

“It was great, the assistant instructor was really helpful, the career coach and staff were exceptionally helpful when it came to anything, and I really felt supported,” said Jeff.

After bootcamp, Jeff made more friends than just the instructor he knew before enrolling in We Can Code IT. He mentioned one of the most important parts of bootcamp was the camaraderie between himself and other students.

“Being in the classroom for a full-time bootcamp, you make connections with the students. You’re all in the same situation. It’s cool to be in bootcamp then transfer into a career with a group of people,” said Jeff.

“The hardest thing about going into the bootcamp is making the jump. Once you’re in the bootcamp, you’re on the rails and in the program. Quitting your job and taking 3.5 months to go to the bootcamp is the hardest part. I love We Can Code IT, it’s great and I have convinced multiple friends to go. I can not say enough about it,” Jeff concluded.