We Can Code IT (WCCI) nationwide bootcamp graduate, Emmanuel Mugogo, he had recently graduated and landed a job as a contractor with Nationwide Insurance. We later checked in with Emmanuel to see what he was up to and weren’t surprised to see that he had been building on what he learned at WCCI as he expanded his knowledge and earning power as a senior software engineer.

Emmanuel came to WCCI at the suggestion of his chief in the military. Emmanuel mentioned that he was interested in a computer science program, and his chief suggested that instead of spending all the tuition money required for a college program, Emmanuel might want to consider a coding bootcamp. Emmanuel found WCCI and dove in head first. He chose WCCI for the career opportunity that the bootcamp provides, “To be honest I was really looking for career support, most of the bootcamps can just teach you the technical aspect of it without really supporting you to break into the industry.” Emmanuel explained. He goes on to say of WCCI, 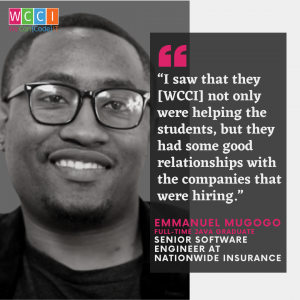 He also adds that “WCCI also gave me some really good technical understanding that helped me to knock off my technical interviews.”

He received his job offer on the last day of coding bootcamp and went to work for Nationwide Insurance as a contractor with a company called Tech Systems as a systems engineer. Emmanuel credits his being able to land a job so quickly to the advantages that WCCI provides by having hiring companies come in and meet with students throughout the program. When asked about the pay increase that Emmanuel received from his first offer he says, “It was a game changer! My first offer was about double what I was making before and at least every year, you know, it has been going up.”

After the contracted project with Nationwide came to an end, Nationwide offered Emmanuel a full-time position as a software developer. Emmanuel explains, I’ve been on the development side ever since then, up until about three or four months ago when I decided to get into some cloud computing.”  Since then, Emmanuel was promoted to a Senior Software Engineer role.

Emmanuel has been busy lately and is on the cusp of a unique opportunity. He was given the opportunity to apply for a Nationwide Insurance program called “Intake”. Emmanuel was one of the eight people accepted into the program. He explains that, “It’s a two-year rotational program where I get to rotate to three different teams with different technologies for eight months each.”  He is currently doing a cloud technology rotation, next is front end/mobile development and then he will finally work with the security team. At that point Emmanuel will have touched each piece of technology that he wanted to explore. He describes his final destination as, “My end goal in the next two or three years is to be in the architectural role.”

Talking with Emmanuel was a pleasure and he was visibly happy and proud of his accomplishments. Why shouldn’t he be?

Just so we have this straight, Emmanuel… You’re receiving a high-paying salary in a rewarding position to explore different technologies in order to gain perspective that will ultimately lead you to your dream job? Wow! Sweet deal.