Coming into bootcamp, Dylon Colquitt had some college experience with a background in customer service. A colleague recommended Dylon to We Can Code IT and told him the bootcamp had succeeded in helping a friend get a job in tech. Colquitt took note of this conversation but did not see himself starting bootcamp right away.

Beginning WCCI, Dylon had little coding experience but he believed he had a lot to gain. Dylon was correct in making this assumption. The online course pleasantly surprised him. He made substantial progress during the small time frame of 14 weeks. In fact,  his skills vamped up tenfold after his enrollment.

Instructors were another element to add to his positive experience. Dylon and his fellow students were given an impressive quality and quantity of materials, examples, and resources.  Once  he was fully settled into the virtual course, he dubbed his experience as “phenomenal” and described his instructors as “fantastic.”

Many people can relate to Dylon when he says he prefers a hands-on, project-based curriculum. Luckily,  We Can Code IT provides an experience that balances teamwork with individual tasks and rationed responsibility. “They really held us accountable,” said Dylon.

WCCI is Here to Help Our Students Through Any Struggle

Although Dylon remained hard-working during bootcamp, he reached a minor roadblock. He realized he would face an obstacle that is no stranger to many people pursuing a new career path.  Throughout his journey, Dylon recognized that overcoming imposter syndrome is more of an influential factor than many realize. When it comes to gaining new knowledge, it is easy to doubt your skills and progress.

“Imposter syndrome is a thing, but the more you push through the courses, you realize you really did learn a lot. You see your progress from beginning to end. It’s a lot of learning and you know what you know, but you don’t realize it at the time,”  said Dylon.

Imposter syndrome not only impacted Dylon’s experience during bootcamp, but it also showed its face during the job searching process. Entering the job market as a new software developer presents its challenges, but with help from WCCI’s career services, the process was completely different for Dylon. There were a few services, in particular, WCCI offered that made an exceptional impact on Dylon’s job search experience.

“Learning about resumes, LinkedIn, being given updates on Slack for jobs, it was essential. I don’t know if I would have gotten as far [in the job search] if it wasn’t for We Can Code IT,” said Dylon.

Dylon amplified his skills during bootcamp. He worked on individual tasks, team-based projects, and consistently held himself accountable.  He attributes much of his success today to this teaching format. Once Dylon was equipped with the necessary knowledge and skillsets, he headed off towards the tech job market.

Dylon is grateful for his time at WCCI. He landed an amazing job in tech and gained valuable coding knowledge. He offers a word of advice for those who might be considering a career in tech through WCCI’s bootcamp. 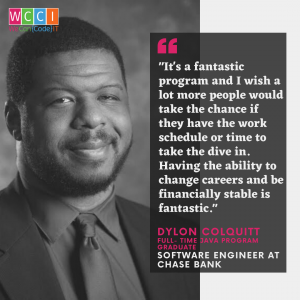 Dylon says, “It’s a fantastic program and I wish a lot more people would take the chance if they have the work schedule or time to take the dive in. Having the ability to change careers and be financially stable is fantastic.”

By being confident in his skills and tracking progress from beginning to end, Dylon realized he had successfully overcome imposter syndrome. Now, he is on his way to an exceptional career in tech.  Today, Dylon takes the next steps toward building a life with a career field he loves and excels in. He started his first job as a software engineer in late June.