Douglas Pennington started out as a warehouse manager for a mattress company. He went to college and received his Bachelors of Science degree in Criminal Justice.

He understood that the tech field is growing rapidly and believed he should switch his career to a growing field.

Douglas had a bit of HTML and CSS experience from years prior, but he forgot much of this information. He saw this as an opportunity to study on his own before enrolling in the Spring 2021 Java bootcamp.

Douglas’s aunt is in the business of hiring a lot of developers who specifically graduated from We Can Code IT.

“She had a long track record of hiring people from We Can Code IT and it’s been going well for her,” said Douglas.

During Douglas’s time in bootcamp, he made connections with many  people. He first described his instructors, Dave and Jordan, as being the best at what they do. 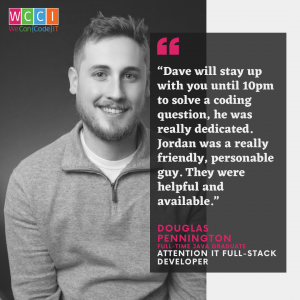 “Dave will stay up with you until 10pm to solve a coding question, he was really dedicated. Jordan was a really friendly, personable guy. They were helpful and available,” Douglas affirmed.

Aside from his relationship with his instructors, Douglas also made unique connections with the rest of his classmates.

“I bonded with my group because it felt like we were all working hard towards the same goal. We Can Code IT did a great job of putting us together. We solved common problems. We essentially were there fighting together. There honestly is not one member of my team that I wouldn’t recommend from a job right now.” Douglas continued, “We Can Code IT made it infinitely easier to learn how to code because as a result, I was surrounded with a ton of talented people who I could fall back on and help me.” This support circle ranged from instructors to classmates.

One of the major lessons Douglas learned during bootcamp was that confidence is incredibly important.

“If you don’t think you can tackle problems, you may crumble,” said Douglas. “It may take hours to figure out things and nobody will know what’s going on. This is a normal part of the process. You will also have to sell yourself to employers and be confident in your abilities.”

Today, Douglas works for Attention IT. He is limited in how he can explain his job because of his security clearance, but a lot of his work includes creating and selling environmental compliance software.