Dawna was a high school student when she first acknowledged her passion for tech. She completed a two-year high school computer networking class but got little out of the program once her teacher suddenly left the program a week before it started. She then decided to switch gears away from tech by obtaining her bachelor’s degree in Chemistry.

Dawna’s time away from tech was short-lived. She limited herself to around 5 years until she decided to turn back and chase her passion; computer programming. After taking a few self-paced online courses, Dawna was finally ready to take the next step toward changing her career and becoming a software engineer.

As Dawna started refamiliarizing herself with the tech space, she did not have the interviewing or professional skills to obtain a job in computer science. Luckily for Dawna, WCCI specializes in training students who master these skills.

Because Dawna was new to writing coding languages, she was especially excited about the extensive bootcamp curriculum. The curriculum offered a well-rounded education which prepared Dawna to face the real world as a software engineer. 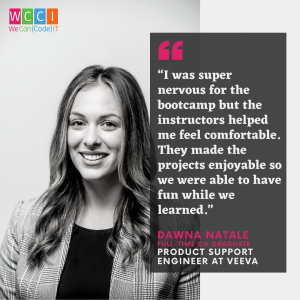 Dawna’s rigorous tech training was not the only aspect of her education which set her apart from other typical software engineers. A second feature Dawna loved about her WCCI education was the classroom flexibility. Bootcamp students had classes in the morning, providing a productive structure.  “I liked that it was more local, flexible and the hours were what sold me. It wasn’t so late in the day that it was a full-time job, but it still was a good time frame during the day. I also liked the idea of being remote if I needed to be.” Because of her flexible and efficient bootcamp schedule, Dawna was able to balance other aspects of her life while acquiring an education.

The flexible schedule and productive atmosphere couldn’t have been made possible without facilitation from the instructors. Aside from creating a productive environment, the instructors were also relaxed and made the bootcamp experience enjoyable for all attendees. “The instructors made everything fun. I looked forward to going to class. I am sad it is over,” Dawna said.

After graduating from bootcamp, Dawna reflected on the challenges she faced during the earlier stages of her experience. While she had a bit of tech experience before bootcamp, imposter syndrome is still a barrier which makes changing careers difficult for many. “I was super nervous for the bootcamp, but the instructors helped me feel comfortable. They made the projects enjoyable so we were able to have fun while we learned,” she said. Because of the unwavering support coming from instructors, Dawna overcame her nervousness and finished bootcamp strong.

Today, Dawna is a product support engineer for Veeva. She uses the researching skills and resources she was given during bootcamp to continuously improve her knowledge and problem-solve both on her own and with her team.