From PreSkill To Full-stack Coding Bootcamp, Dasmine Increases Opportunities As A Software Developer At Chase

Dasmine Wright was working in network support for two years before attending We Can Code IT (WCCI). While she was already equipped with some technical knowledge, her experience in IT was far from coding experience, and Dasmine wanted more out of her career. She was passionate about tech and enjoyed her time in IT, but was eager to advance her skills and learn to program.

In her search for further opportunities in the tech space, Dasmine attended a Black tech event. During the event she took a flier and met with friendly WCCI staff. The experience stuck with her, and she continued to explore the program. After receiving recommendations from past students, reading many positive reviews and conducting extensive research, Dasmine honed in on WCCI.  She chose the WCCI Bootcamp because it taught skill sets that were “…more extensive than other coding bootcamps in Columbus.” 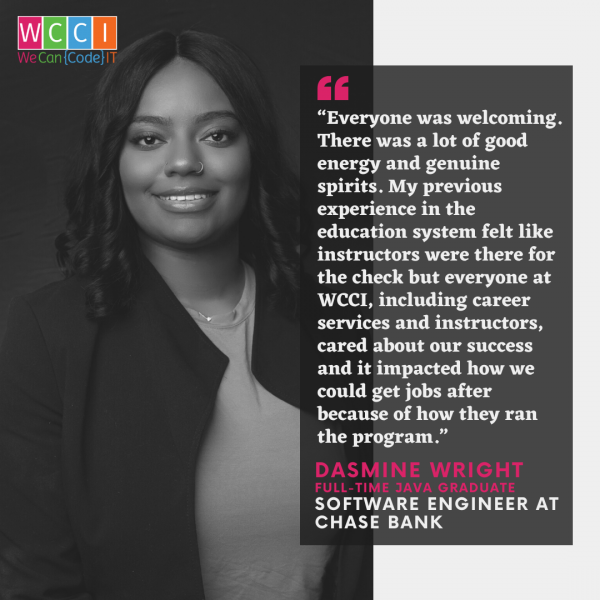 Dasmine was initially concerned about her lack of programming experience. This phenomena, called imposter syndrome, is characterized by unfounded self-doubt in one’s abilities.  WCCI sees this unnecessary fear in a lot of new coding students. To alleviate Dasmine’s concerns, she attended WCCI’s PreSkill program that is designed to prepare students feeling like they don’t initially have enough technical background for WCCI full-time Bootcamp. The short program familiarized her with basic coding concepts, and she even met a few people who ended up being her classmates in full-time Coding Bootcamp. When asked about her PreSkill experience, Dasmine explained, “I was there every day a

ttending every session. It helped my decision to enroll in WCCI’s full-time Bootcamp. Even as a beginning coder, you won’t understand everything going on but it gives a background in brief terminology, methods which helped me a lot once I joined the full-time Bootcamp.”

Once Dasmine graduated from PreSkill and started the full-time coding bootcamp, she was amazed by how the education team structured the curriculum.  “Their curriculum is really thorough,” said Dasmine. “They broke it down to where a true beginner could learn. The instructors did not start with the most difficult concepts, and it was a very structured curriculum.”

Aside from giving positive feedback about WCCI  curriculum, Dasmine was also incredibly upbeat when asked about her experience with WCCI staff and instructors. “Everyone was welcoming. There was a lot of good energy and genuine spirits. My previous experience in the education system felt like instructors were there for the check but everyone at WCCI, including career services and instructors, cared ab

out our success and it impacted how we could get jobs after because of how they ran the program,” Dasmine said.

Although Dasmine had prior experience interviewing, she was still able to learn a lot from her student success coaches during their sessions together. She explained, “We would break down how to effectively interview, what questions to ask, and how to look presentable during an interview. It was valuable even for someone who has experience interviewing, there were still gems I was able to learn along the way.”

After Dasmine completed her full-stack program, she reflected on some of the concepts she was taught during bootcamp that she finds to be indispensable in her current position. She encounters WCCI taught concepts like the importance of communication and teamwork on a day-to-day basis. “The group work was one of the most valuable lessons throughout bootcamp. Group work is such an integral part of IT and tech nowadays. I developed insight into how to work within a team and communicate effectively,” Dasmine explained.

Thanks to WCCI training, Dasmine is better than ever with a new, lucrative position at JP Morgan Chase as a software engineer. Her future is bright and the sky is the limit as she continues to foster the skills developed during her WCCI journey.