Dallas Baldwin has always been fascinated by the way certain technologies work together. As a young boy, he would frequently frustrate his family members by taking apart the VCR. Little did they know, Dallas was in the works of developing a new lifelong passion.

After completing a year and a half of college, Dallas then worked as an MRI engineer. Since working as an MRI engineer required only mild technology expertise, Dallas still did not have any coding experience. He explained to the team that he did not even have experience with Microsoft Excel or Office.

Knowing he had a passion for tech, Dallas was hungry for more technical knowledge and exposure. He stumbled upon We Can Code IT (WCCI) when researching computer training courses on Google. “ I saw the funding options, which really attracted me to it. I wanted to receive the training and not pay upfront. It was more affordable compared to most degrees,“ he said. Luckily for Dallas, WCCI is one of the only coding bootcamps which offer extensive funding options. 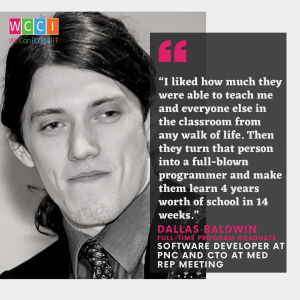 Dallas did not regret his decision to pursue WCCI after learning of the ISA. When he started bootcamp, he was immediately impressed by the classroom environment. When asked about the classroom conditions, Dallas said

“I liked how much they were able to teach me and everyone else in the classroom from any walk of life. Then they turn that person into a full-blown programmer and make them learn 4 years worth of school in 14 weeks.”

Dallas is passionate when it comes to attending a coding bootcamp instead of a four-year institution. When referencing those pursuing an undergraduate degree in computer science, Dallas described instructors as “Very intelligent. They were exactly what I expected, almost straight out of what you see in the movies. They can answer any question you throw at them. They’re unique at communicating and I still communicate with them to this day,” Dallas explained.

While Dallas placed his trust in the instructors’ expertise and communication, he also relied on them to help him with various projects. “It helped by having two senior developers,” he expressed.

”You could ask any question or something that was during class or loosely out of school, relative to what we were talking about. If you’re doing something cool, like a project, you have them at your disposal to help fix any problems you run into. Having two senior developers at your disposal is priceless. It’s impossible to get answers from people when learning online on your own.”

Dallas was able to smoothly work on personal projects and reference his instructors during the process. All of the hard work during bootcamp paid off for Dallas when he started the job search. 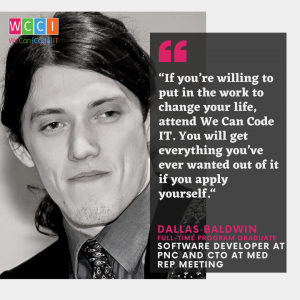 In fact, he secured a job before the end of bootcamp. Dallas was offered an associate role at PNC 10 days before his graduation. “WCCI completely changed my life,” Dallas explained. He did not stop after securing a job with PNC. Dallas now also works as a CTO at Med Rep Meeting. He is actively developing their application.

After a long phone interview, Dallas left us with the closing remarks of “If you’re willing to put in the work to change your life, attend We Can Code IT. You will get everything you’ve ever wanted out of it if you apply yourself.“