Coding bootcamp graduate Kelli Valverde was determined to evolve in her career and manifest the success she wanted. She had a budding interest in software development and web design after a ten-year career as a graphic designer. Kelli felt as though her career did not meet the full capacity of her capabilities. She sought more challenges and, with a growing interest in tech, she began her journey to becoming a UX Designer. After attending an info session, Kelli decided We Can Code IT was the place to find the support she needed in taking her career to the next level. Her decision would pay off when just months after graduating, she would achieve her goal by landing a full-time UX/QA Designer position with The Cleveland Orchestra. Learn more about her journey to achievement, and how our program helped prepare her for her new role.

It was a really great experience and I really valued it. I really think that I made the right choice, and I am so glad that bootcamps like this exist. I think that We Can Code IT is doing it really well. 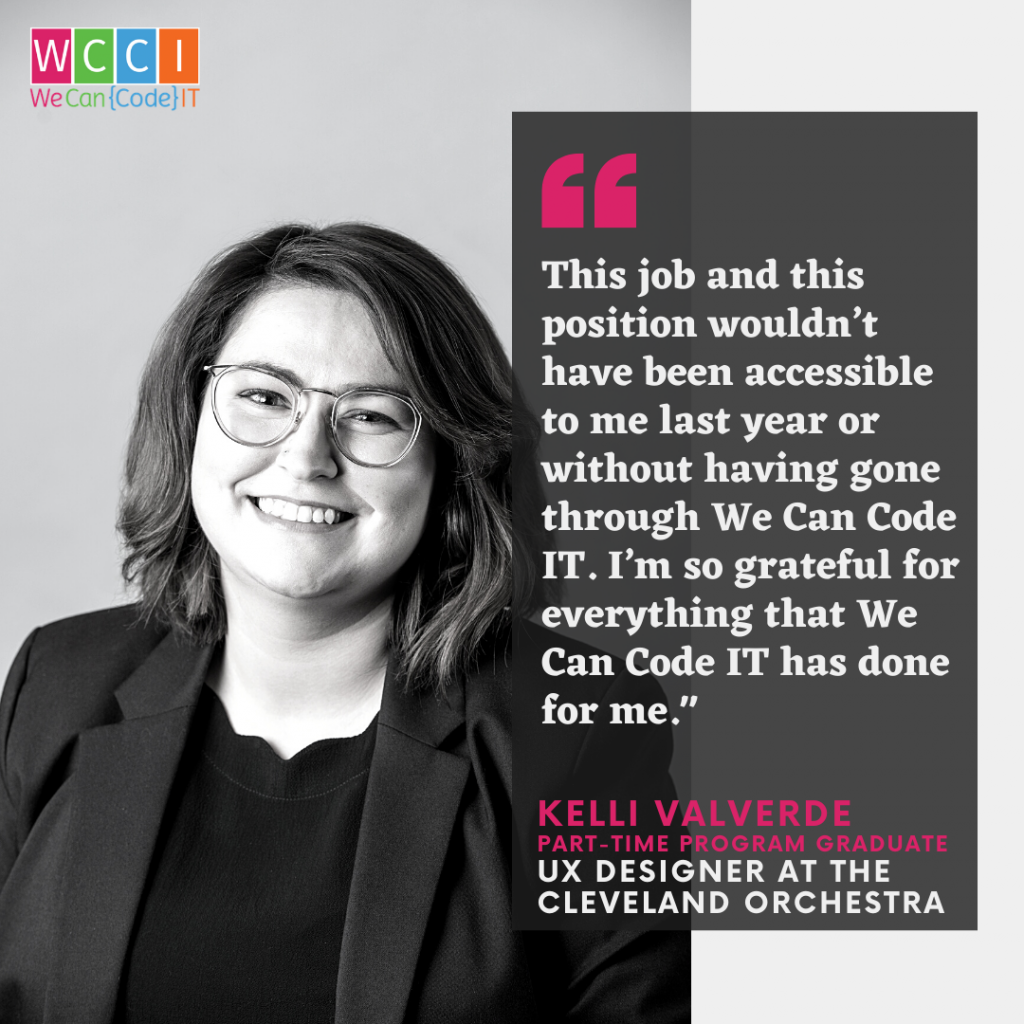 I went to the University of Mount Union and got my Bachelor of Arts in Fine Art. After college, I headed into graphic design. I started out as an imaging specialist. So it was really just a lot of looking for stock photos, and a lot of data entering and kind of working in the design department but not doing a lot of design. So I was kind of slowly working my way into becoming a graphic designer. I did that for about ten years.

I also really liked part of the messaging and the mission to be more inclusive. As a woman breaking into an industry that’s traditionally male-oriented, I felt that I’d like having that kind of support from We Can Code IT.

Over the course of my graphic design career, I did teach myself how to use Adobe InDesign, Illustrator, and Photoshop. I was always kind of leaning towards teaching myself new applications and really looking for new things to learn. I think after a point in time I realized that I also was interested in web design. I was interested in those little places where graphic design overlapped with the technical field. Also, my husband is in software development. We’ve always talked about what we did and shared information. I’ve always felt like I had the capacity to do more than just graphic design and what I was doing in my field. I just really felt like I wanted to continue learning, and I didn’t want to be held back.

My journey with We Can Code IT started a year ago when I attended an information session. That solidified it for me. Right before that, I had started job searching for UX positions and I came against a lot of friction where I didn’t have the skill sets that I needed. That’s really what motivated me. I looked at my husband and other friends in software development and saw that they had some things that I didn’t. My main goal was to address those skill gaps that were cheating me from moving forward in my career.

I did do a little bit of research. Though, I listen to NPR a lot so I would hear about it on the radio every day as I was going to my graphic design lab. When I was looking I didn’t really want to give up my full-time job. It really wasn’t an option for me. So I went with the FlexCode™ Bootcamp which really felt like it was suited to my lifestyle. It was perfect. I had also heard some really good feedback. My husband had worked with a couple of graduates from We Can Code IT, and had heard really good things. He had seen their code and worked with them personally. So that was also another kind of pointed recommendation to me. I also really liked part of the messaging and mission to be more inclusive. As a woman breaking into an industry that’s traditionally male-oriented, I felt that I’d like having that kind of support from We Can Code IT. I’d also like to at least put my tuition money into an organization that I believe in, an organization that’s working to make that better, and close that gap.

What was your coding experience before attending the We Can Code IT program?

I had kind of toyed around with Codecademy. It’s a nice online tool. It was a very good introductory tool for me to get used to seeing HTML and CSS. Though, I honestly felt like it was really too loose for me. I needed that structure to feel motivated. Also one of my responsibilities for one of my employers was to manage their FTP site, so that was a small taste as well. It wasn’t super technical, but somebody in my department needed to do it and I was the most technical person at the time.

I always felt really good about my decision.

Very knowledgeable. They were very understanding and very easy to talk to. They were also very approachable. I always felt really good about my decision.

What did you like most about your We Can Code IT experience?

I really liked that I was able to do FlexCode™. That really did make a big difference for me. As we kind of unexpectedly moved into the pandemic and remote times, I think that I felt very well-prepared for that. So that was like a bonus and silver lining part of it.

I also really enjoyed the peer programming aspect of it and our final projects. I thought that was really good and really prepared me for the technical interviews that I did. Since interviewing now is all remote, it wasn’t as unnatural as I might have felt a year ago. It was definitely not as much of a shock like I felt it could have been.

Being able to talk through why I made my decisions or how others made theirs was really helpful. That feedback was really essential in my learning.

Did We Can Code IT make your learning experience easier?

The job market was tough. I started out looking in March and into April, and my cohort ended in April. So I really started looking in April and late May. At that time there were very few junior-level positions. It was really tough and I don’t think that there was anything anyone could do about it other than ride it out. At that point, I took advantage of looking for more informational interviews. I don’t know that I would’ve done that on my own. I think that’s definitely a point where career services encouraged me to get outside of my own comfort zone. I think that was very very helpful.

This job and this position wouldn’t have been accessible to me last year or without having gone through We Can Code IT. I’m so grateful for everything that We Can Code IT has done for me.

I reached out to a friend that I knew from college who worked at the Orchestra. I showed him my portfolio and asked him if I should apply. He thought so and passed it along to one of the people who would eventually be on my future team. I received some really positive feedback on my portfolio so I applied.

I went through the interview process which wasn’t super long. It was shorter than most I had done in the past. I had an initial screening with their HR person. They were very nice and told me about the culture. Then I went to the next stage which was talking with the designer who seen my portfolio. We got a chance to talk more about the technical aspects. I had felt really good about my skill level. In this interview as well as all my others we talked a lot about my final project. I think that it was really helpful to have that experience (creating my final project) applying for careers and really not having a whole lot of professional experience in this tech industry prior. I think that it was very helpful to be like “yeah I don’t have as much experience, but I’ve done this and made this.” That was the value I found in that.

So we talked a lot about that and then more about my portfolio. After that, I spoke with their technical assistant. I answered some questions in a Google Form and worked on a small project they gave me to create. More executive interviews followed, which were more cultural and behavioral-based questions.

It was helpful to have career services because interviews are really nerve-wracking. I feel like I get stuck. Though I think having those days where we talked through that with career services was very helpful.

This position is exactly what I was hoping for and looking for. I found out about it and I kind of networked my way through that. This job and this position wouldn’t have been accessible to me last year or without having gone through We Can Code IT. I’m so grateful for everything that We Can Code IT has done for me. I’m so excited that I took that opportunity because this is the perfect outcome.

It was a really great experience and I really valued it. I really think that I made the right choice, and I am so glad that bootcamps like this exist. I think that We Can Code IT is doing it really well. I’m really excited to see how you guys do in the future. I can only hope that more people are seeing the things that I saw in my previous career and say that, “Hey I see that there is a wider future in technology and I can get through WCCI to get there.”