After getting his undergraduate degree in Chinese Studies and moving to China for 10 years to pursue a career as a linguist, Alex Gorchenour woke up one day and realized that coding may be the right career for him.

Alex used a bit of Python to make his workflow go quicker during his previous job, and realized he was spending way more time than he thought he would.

After reaching out to We Can Code IT, Alex found that he really enjoyed the staff and instructors of the organization. He mentioned his experience with admissions being 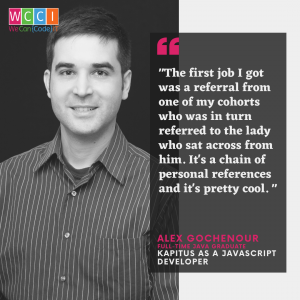 The highlight of Alex’s We Can Code IT experience includes the relationships he made during his cohort. He made friends who he later worked with at Kapitus.

“Because it was a robustly keen environment, you got to meet with these people everyday and work right next to them. The first job I got was a referral from one of my cohorts who was in turn referred to the lady who sat across from him. It’s a chain of personal references and it’s pretty cool. I met up with a couple of my former colleagues since graduating in 2019,“ said Alex.

Alex also discussed the value in being taught a few industry best practices such as paired programming and Test Driven Design (TDD.) Because Alex was able to learn these processes he now works faster and more efficiently. Alex also mentioned how many corporations hold these specific industry best practices at a high regard. He has seen in his personal life how far these practices can take a developer.

Today, Alex works as a developer at Kapitus where he utilizes the skills and practices he learned from attending We Can Code IT. Thanks to these lessons, Alex will be able to organize tasks between different developers and understand how to test code.